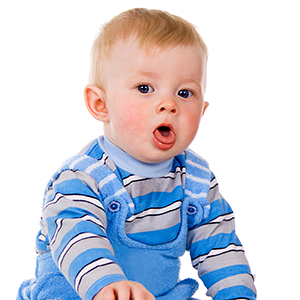 Croup is a viral infection of the voice box (larynx) and windpipe (trachea) associated with signs of a respiratory infection, such as a runny nose or cough. It’s also a very common ailment of childhood.

Usually the first indication of croup is a cough that sounds like the bark of a dog or seal. Your child may have trouble breathing because the tissue around the larynx is inflamed, constricting the windpipe, and because the bronchial passages are blocked with mucus. The sound of air being forced through the narrowed airways may produce a hollow, raspy noise, called stridor, with each inhaled breath.

Croup lasts for five or six days and is highly contagious to other children. It usually affects children between the ages of 3 months and 6 years (the average age is 2 years), whose small windpipes and bronchial passages are most vulnerable to blockage.

Most cases are mild and can be managed at home. In severe cases, a child may need to be hospitalized.

Epiglottitis is an unrelated bacterial infection of tissue in the back of the throat. Though the symptoms might mimic croup in the early stages, epiglottitis becomes very severe quickly. Children with epiglottitis look very ill, with high fevers and drooling. They have trouble lying down because that makes it hard for them to breathe. Epiglottitis has become very rare because there is an effective vaccine to prevent it.

Most croup cases are caused by a parainfluenza virus. The disease is transmitted by airborne droplets from an infected child’s cough