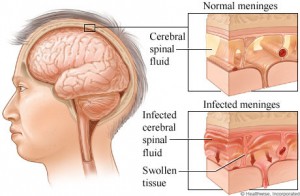 Meningitis is a serious but relatively rare medical condition. The symptoms of meningitis can come on quickly and need urgent medical attention.

Meningitis can be causes by bacteria or a virus. Fungal meningitis is a rare form and usually only affects people with weakened immune systems.

Around 3,400 people get bacterial meningitis and associated septicaemia each year in the UK.

Around 50% of meningitis cases in the UK are among under 5s, babies and toddlers.

University students are also at a higher risk of meningitis with 15-19 years two and a half times more like to carry olds carry a meningitis causing bacteria than adults.

Meningitis is almost always caused by a bacterial or viral infection that began elsewhere in the body, such as in the ears, sinuses or upper respiratory tract. Less common causes of meningitis include fungal infection, immune system disorders and medications.

The bacterial form of meningitis is an extremely serious illness that requires immediate medical attention. If not treated quickly, it can lead to death within hours or to permanent brain damage.

Bacterial meningitis is caused by any one of several bacteria. Neisseria meningitidis, or “meningococcus”, is common in young adults, and Streptococcus pneumoniae or “pneumococcus” is the most common form in adults. Haemophilus influenza type b (Hib) was a common form in infants until the Hib vaccine was introduced for infants. Meningococcus and pneumococcus account for most of the bacterial meningitis cases in the UK.

Meningitis C vaccination is part of the NHS childhood vaccination programme with a booster jab now given to 12-13 year olds.

Plans are being made for meningitis B vaccination to be made available for babies as part of routine NHS vaccinations.

The meningitis bacteria can spread from person to person through coughing and sneezing. If you are around someone who has bacterial meningitis, seek medical advice to ask if you need to take steps so you don’t become infected. In many instances, bacterial meningitis develops when bacteria get into the bloodstream from the sinuses, ears or other part of the upper respiratory tract. The bacteria then travel through the bloodstream to the brain.

Viral meningitis is more common than the bacterial form and generally, but not always, less serious. It can be triggered by a number of viruses, including several that can cause diarrhoea. People with viral meningitis are much less likely to have permanent brain damage after the infection resolves. Most will recover completely.

Fungal meningitis is much less common than the other two infectious forms. Fungus-related meningitis is rare in healthy people. However, somebody who has an impaired immune system, such as a person with AIDS, is more likely to become infected with this form of meningitis.

The symptoms of meninigitis will help doctors diagnose the condition.

A procedure known as a lumbar puncture, sometimes called a spinal tap, will help confirm the diagnosis. An area of the back is injected with an anaesthetic, and a needle is slipped between two bones in the spine to obtain a small sample of spinal fluid. This fluid is normally clear, so if it appears cloudy and contains pus cells, you may have meningitis.

Laboratory analysis will help determine which specific type of meningitis is present: bacterial, viral or fungal. Samples of blood and urine, and secretions from the nose or ears may also be taken. Because the disease can progress very rapidly, treatment will begin immediately, even before the results of the tests are known.

What is the treatment for meningitis?

The bacterial form of meningitis is especially dangerous and must be treated quickly. Go to the nearest accident and emergency department right away if you suspect you have meningitis.

Urgent treatment in an intensive care unit (ICU) is required. Intravenous antibiotics are used to treat the underlying infection, while life-support equipment and intravenous fluids are used to help support the body as it recovers. Steroids may also be given as these can help reduce any swelling.

If the bacteria have also entered the blood, they can release toxins that damage healthy tissue. If the tissue damage is severe, the tissue will die and become gangrenous. Gangrenous tissue will need to be surgically removed. Most people, if treated early enough, will make a partial recovery within 10 to 14 days, though it may be several weeks or months before they recover fully.

If the symptoms of viral meningitis are severe enough to warrant admission to hospital, it will be treated in the same way as bacterial meningitis until a diagnosis has been confirmed. Then antibiotics will be withdrawn. Intravenous fluids will be continued to help support the body as it recovers.

Most people with viral meningitis will not require hospital treatment and will recover within 14 days without the need for treatment.

If you have fungal meningitis, you will receive anti-fungal medicines to fight the particular type of fungal infection. Treatment will also include fluids to prevent dehydration, and medicines to control pain and fever.