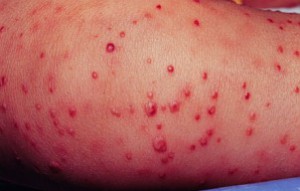 One type of staph infection that involves skin is called cellulitis and affects the skin’s deeper layers. It is treatable with antibiotics.

This type of infection is very common in the general population — and more common and more severe in people with weak immune systems. People who have diabetes or weakened immunity are particularly prone to developing cellulitis.

What Are the Symptoms of a Staph Infection of the Skin?
Staph cellulitis usually begins as a small area of tenderness, swelling, and redness. Sometimes it begins with an open sore. Other times, there is no obvious break in the skin at all.

The signs of cellulitis are those of any inflammation — redness, warmth, swelling, and pain. Any skin sore or ulcer that has these signs may be developing cellulitis. If the staph infection spreads, the person may develop a fever, sometimes with chills and sweats, as well as swelling in the area.

Other staph infections of the skin include impetigo, a painful rash that is contagious, boils, and in babies and young children, staphylococcal scalded skin syndrome, which causes rash, blisters, and fever.

In about 50% of cases, however, resistance is seen to even these stronger antibiotics. These cases are no longer just happening in hospitals — as once was true — but now are occurring in the general community. That’s been a problem. Many doctors are accustomed to using certain antibiotics, but those then fail because of antibiotic resistance. There are several more potent antibiotics now, but doctors need to know when to use them to prevent further antibiotic resistance.

There’s another treatment sometimes used with staph infections. If the infection goes so deep that it involves muscles or fibers that enclose muscles, it needs to be surgically cleaned.

Can Staph Infections Be Prevented?
You can take steps to help prevent staph infections. Any time you have a cut or skin breakdown, wash it with soap and water, keep it clean and dry, and keep it covered. A couple of recent outbreaks among football players began when one team member had a boil and the infection was spread to other team members.

A staph infection is contagious if the wound is weeping or draining and if people share towels or other items that are contaminated. Wearing foot coverings in locker rooms and other commonly used areas can help prevent contamination.