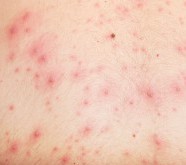 Chickenpox is a viral illness characterised by a very itchy red rash. It is one of the most common infectious diseases of childhood. It is usually mild in children but there is a risk of serious complications, such as bacterial pneumonia.

People who have had chickenpox almost always develop lifetime immunity (meaning you are extremely unlikely to get it again). However, the virus remains dormant in the body and it can reactivate later in life and cause shingles.

Chickenpox is caused by the herpes varicella-zoster virus. It is spread by droplets from a sneeze or cough, or by contact with the clothing, bed linens or oozing blisters of an infected person. The onset of symptoms is 10 to 21 days after exposure. The disease is most contagious a day or two before the rash appears and until the rash is completely dry and scabbed over.

What are the symptoms of chickenpox?

Chickenpox appears as a very itchy rash that spreads from the torso to the neck, face and limbs. Lasting seven to 10 days, the rash progresses from red bumps to fluid-filled blisters (vesicles) that drain and scab over. Vesicles may also appear in the mouth, on the scalp, around the eyes or on the genitals and can be very painful.

This cycle repeats itself in new areas of the body until finally, after about two weeks, all of the sores have healed. The disease is contagious until all the spots have dried up. Unfortunately, the virus is also contagious for at least one day before the rash breaks out.

Seek medical advice about chickenpox if:

You think your child has chickenpox. A doctor can confirm your diagnosis. Chickenpox is accompanied by severe skin pain and the rash produces a greenish discharge and the surrounding skin becomes red, which are signs of a secondary bacterial skin infection.

Chickenpox is accompanied by a stiff neck, persistent sleepiness or lethargy as these are symptoms of a more serious illness such as meningitis or encephalitis.

Get medical help immediately if:

Your child is recovering from chickenpox and begins running a fever, vomiting, having convulsions or is drowsy.

An adult family member gets chickenpox. You are pregnant, have never had chickenpox and are exposed to the disease. Your unborn child may be at risk so seek medical advice without delay.

What are the treatments for chickenpox?

Chickenpox is extremely contagious. Keep your child at home until all of the blisters have burst and crusted over.

Most cases of chickenpox require little or no treatment beyond treating the symptoms.

The prescription antiviral drug aciclovir is effective for shortening the duration of chickenpox symptoms and may be recommended for certain people with chickenpox, such as pregnant women, those with a weakened immune system, and adults who seek medical advice within 24 hours of the rash appearing.

In addition, your doctor may recommend over-the-counter painkillers and an antihistamine to relieve pain, itching and swelling. Antibiotics are called for if a secondary bacterial skin infection arises or if the person with chickenpox develops bacterial pneumonia.

This site uses Cookies. By continuing to browse the site you are agreeing to our use of cookies.

We use cookies on our website to give you the most relevant experience by remembering your preferences and repeat visits. By clicking “Accept All”, you consent to the use of ALL the cookies. However, you may visit "Cookie Settings" to provide a controlled consent.
Cookie SettingsAccept All
Manage consent

This website uses cookies to improve your experience while you navigate through the website. Out of these, the cookies that are categorized as necessary are stored on your browser as they are essential for the working of basic functionalities of the website. We also use third-party cookies that help us analyze and understand how you use this website. These cookies will be stored in your browser only with your consent. You also have the option to opt-out of these cookies. But opting out of some of these cookies may affect your browsing experience.
Necessary Always Enabled

Performance cookies are used to understand and analyze the key performance indexes of the website which helps in delivering a better user experience for the visitors.

Analytical cookies are used to understand how visitors interact with the website. These cookies help provide information on metrics the number of visitors, bounce rate, traffic source, etc.

Advertisement cookies are used to provide visitors with relevant ads and marketing campaigns. These cookies track visitors across websites and collect information to provide customized ads.

Other uncategorized cookies are those that are being analyzed and have not been classified into a category as yet.