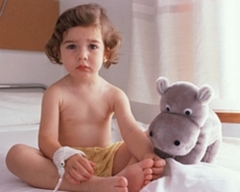 What is Reye syndrome?
Reye syndrome is a rare but serious disease that most often affects children ages 6 to 12 years old. It can cause brain swelling and liver damage. It may be related to using aspirin to treat viral infections.

Reye syndrome can lead to brain damage, liver damage, and death. But if the disease is found and treated early, most children recover from Reye syndrome in a few weeks and have no lasting problems.

What are the symptoms?
Reye syndrome often starts when a child is recovering from a viral illness, such as the flu or chickenpox. Symptoms usually appear 3 to 7 days after the viral illness starts. They may develop over several hours to a day or two.

The first symptoms may include:

Sudden retching or vomiting.
Lack of energy and loss of interest in things.
Strange behavior, such as staring, irritability, personality changes, and slurred speech.
Sleepiness.
As liver damage and brain damage get worse, other symptoms may develop, including:

Confusion. Your child may not know where he or she is, recognize family or friends, or be able to answer simple questions.
Fast, deep breathing (hyperventilation).
Violent behavior, such as hitting others without reason.
Seizures and coma.
If Reye syndrome is not treated quickly, it can cause death.

If your child has symptoms of Reye syndrome, get medical care right away, even if your child has not had a recent viral illness or taken aspirin. Early treatment makes full recovery more likely.

How is Reye syndrome diagnosed?
Your doctor will do a physical exam and ask questions about your child’s symptoms, recent aspirin use, and past health problems.

Your child may need tests such as blood and urine tests, a liver biopsy, a CT scan of the head, and a lumbar puncture (spinal tap).